Women and gender gap, the challenges of tomorrow’s Japan

In a historically patriarchal society such as Japan’s, women with leadership roles have always been scarce. Today the situation hasn’t changed much and in addition of being a cultural issue, it now has become a financial problem too. The World Economic Forum has placed Japan at 104th place in a list of 142 countries ranked by gender equality on the workplace, while Goldman Sachs’ researches have predicted a GDP increase of the 13% – provided the country’s gender gap is filled in swiftly. Prime Minister Shinzo Abe agrees too: things have to change.

Monocle Magazine has chosen to tell the stories of some Japanese women that despite the obstacles blocking their career paths, have managed to be successful in what they do. One of the stories that struck me the most on both a human and a professional level was Ayana Misawa’s, a young vineyardist and oenologist with a top-job at Akeno’s Grace Winery. Despite the wine-making scene being overall male-orientated – and we’re talking about the whole world here, not just Japan – Ayana has managed to reach its top. Today her wine is appreciated by people all around the world: a wine produced in Japan using grapes that until not long ago were not considered much, in a land that only recently has discovered wine (from the mid 1800s onwards). Despite cultural hostility and despite the 90% of Japanese grapes being traditionally consumed as fruit, Ayana’s family never stopped believing in it.

Believing in the land, in the places in which both them and their grapevines were so firmly rooted. It took generations of sweat and hard work, but finally it has paid off: the relay baton from the grandparents’ hands has eventually reached Ayana who, from the Yamanashi Prefecture’s green and fertile hillsides has managed to take over the world. 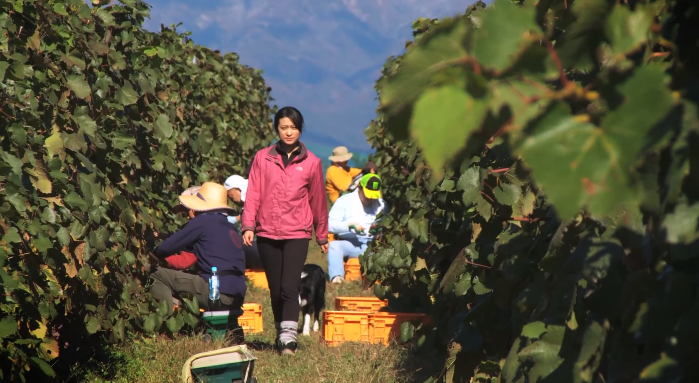