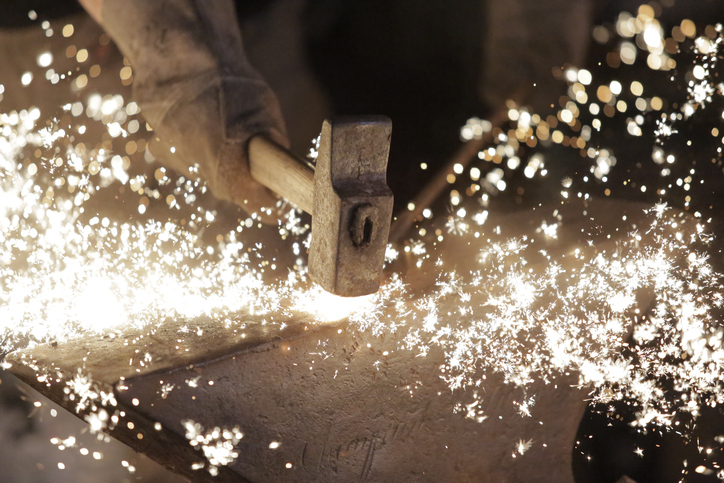 I often talk about art on these virtual pages of mine, and I love to look at it from a 360-degree view, through the different fields it can contaminate: from painting, photography, sculpture, architecture, to lesser-known art forms, those in which the artist is considered mostly an artisan.
Today I’d like to tell you a beautiful story about three British young men, who decided to rediscover an ancient and remote form of art: Japanese bladesmithing. An art that can be traced back to the 14th century, when local blacksmiths started specialising in the production of samurai swords through different techniques.

These three young men, after studying in the best London colleges and traveling the world, decided to dedicate their time to an almost-forgotten, ancient occupation: blacksmithing. They built their first knife in the backyard of their house in Peckham, and it took them two years of countless attempts to reach the quality level they had set for themselves.

They built their own brand, Blenheim Forge, specialised in the production of top-of-the-range knives, all made to order. Their business was established 3 years ago in London and today they focus on two kinds of blades: Damascus blades made of forge-welded steel layers (known as) and 3-layer laminated ones. Blades that indeed have been honed on only one side, as Japanese knife-making tradition dictates, a peculiarity that apparently improves their performance and helps maintaining the structure of the cut food unaltered.

It’s clearly everything but an easy job: the production of these blades does in fact require two different kinds of steel, which are melted together several times. Then, the blades need to be hardened through heating and cooling, followed by a hammering, grinding and polishing process that has to be repeated also several times in order to achieve the desired results. Last but not least: the handle, completely handmade and shaped to perfectly accommodate the blade, which is further sharpened on Japanese water stones. A lengthy process that turns these knives into precious handmade pieces of art.

To me this incredible project, this fascinating entrepreneurial adventure, represents something remarkably important and relevant: talented young people from the best design schools deciding to rediscover and revisit ancient artisan traditions, without being afraid of the amount of hard work involved and, just as importantly, without rushing. Champions of rare patience, something that always plays a vital role in the achievement of quality.