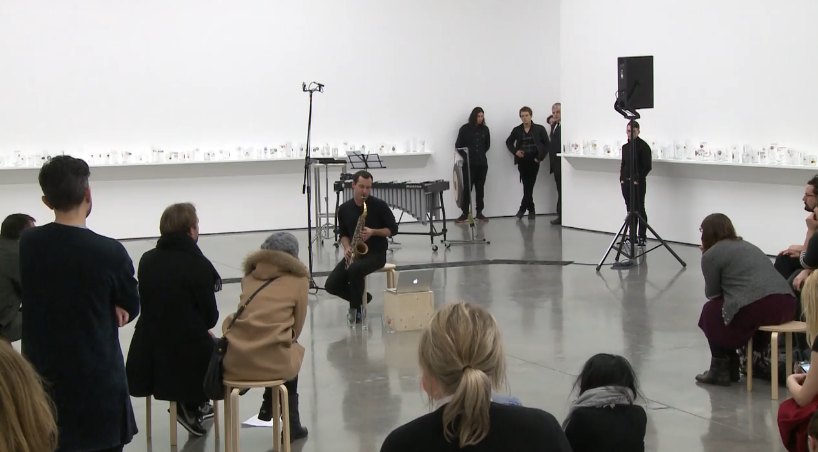 To outdo himself: a hard task for Christian Marclay, the experimental, visionary artist that shocked the world back in 2010 with his 24-hour long art video ‘The Clock’, a meticulously edited collection of scenes from movies, all featuring a reference to time – a wall clock, a character checking his wrist watch – all synchronised to the actual time of the place in which the film was shown. We can then safely say that he’s done it, he’s outdone himself: if you happen to be passing through London in the next few weeks, you’ll have the chance to judge for yourself as the White Cube exhibition is going to be on until april 12th.

Praised by the press, defined by The Guardian as “the most exciting contemporary art show in town”, Marclay’s latest personal effort takes different forms, combining a variety of media and themes: from humongous, vaguely-pop art screen prints that remind of Roy Liechtenstein and Jackson Pollock, to audio and video installations – including one called ‘Pub Crawl’ where Marclay is seen walking down an East London street, making music with empty bottles left on the floor during the night.

And that’s not all… At the White Cube you’ll also find musical performances where you’ll be able to make a record on the spot by pressing into vinyl the sound of the improvised jams held at the exhibition, which will include music from dadaist art movement Fluxus. Different dimensions, all to discover: Marclay’s exhibition will inebriate you with a variety of colours, images and sounds within an industrial context that evokes the deafening noise and captivating atmosphere of a colourful and manic big city high street.