SAGGING PANTS: EVOLUTION AND HISTORY OF A TREND

If you have teenage kids you might have gotten used to it by now: sagging pants have become a classic a while ago, appreciated by young males and females alike all around the world. A trend that had made parents cringe not only in Italy, but in every country affected, to the degree that Npr’s Code Switch has decided to conduct an in-depth investigation into the sagging pants phenomenon following the decision of a Florida city council to implement a ban against this specific attire, with offenders subjected to $500 fines. They justified the new legislation by saying that it was a matter of respect and decency, however between the lines the message was clear: ‘saggers’ embrace gang values and prison culture, promoting moral degradation, therefore it can’t be accepted.

But let’s step back a minute to understand why sagging trousers have such a negative connotation and how this street fashion trend became so popular. It all started in the US, back in the 30s-40s, when inmates used to wear low-rise trousers: certainly not as a fashion statement, but rather because due to security reasons, in jail they they weren’t allowed to have belts. That’s how the first stigma about sagging pants came to be: it was something related to prison culture. Then, in the same period, the zoot suit craze began to spread within the Afroamerican community and with Latinos (especially Mexicans): oversized jackets with padded shoulders combined with extra-wide, high-waisted pegged trousers.

According to fashion historians, rather than being the result of a quest for a new clothing style, zoot suits were the consequence of an economic status: people who couldn’t afford tailor-made suits usually resorted to buying clothes from thrift shops and then asked their mothers and grandmothers to fix them. And that’s how the second stigma came about: sagging pants were associated with low-income minorities, which back then were not quite welcome. Let’s not in fact forget the context of racial segregation in which the trend was born, discrimination that in the US lasted until the 60s.

So what has happened today? As decades, styles and trends went by, the zoot suit moved on from being associated with negative elements, to being considered a classic piece of clothing for youngsters, often worn instead of a Tuxedo on special occasions. It’s not unusual in fact to come across zoot suits at contemporary prom parties, worn by barely-eighteen years old students as a fashion statement. Déjà vu?

It would be good to have a time machine so we could jump 50 years forward and take a peek at future prom trends. I bet that those wanting to sport outfits in true vintage 2000s style will be wearing sagging trousers. And they will look exquisitely elegant. 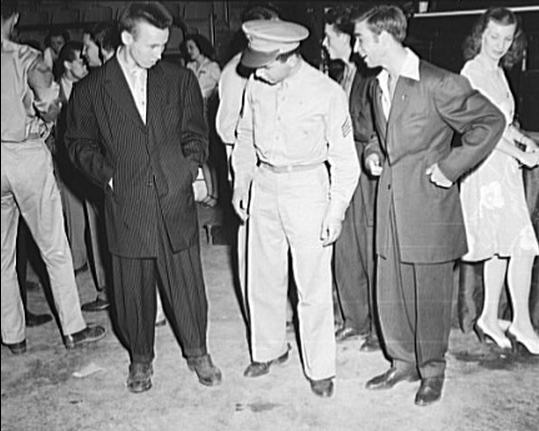