Remember Margaret Thatcher (and the 80s)?

The recent film The Iron Lady, whose portrayal won Meryl Streep the Golden Globe, turned the spotlight back onto the public figure of Margaret Thatcher. But it also gave the audience the chance to reminisce on an era – the 1980s – that was a great cultural and ideological watershed.

Do you remember her, Margaret Thatcher? An icon for liberalists throughout the world due to her initiatives based on cuts and liberalisation, the incarnation, for the leftwing, of a policy insensitive to the lower classes. Certainly she was the only woman in history to have held the office of British Prime Minister, asserting herself in a fully masculine political system that most probably did not support her.

But the film (which, in truth, depicts her rather mercilessly, as even Meryl Streep admitted), gives us the chance to reflect on a crucial point in the twentieth century that we can somehow consider the beginning of modernisation. A period when those of my age were about twenty and felt, more than understood, that an era was coming to an end and another one was beginning.

Between the end of the 70s and beginning of the 80s, two social and economic models faced off in England and elsewhere: a strongly supportive and social system (but that was proving to be recessive) and one in which private initiative would take centre stage. “Raging” capitalism, as then called, against the solidarity of the powerful British Trade Unions.

Thanks to the Conservative shock therapy, British GDP resumed growth after extended difficulties; however, the price was paid by sacrifices, especially by the lower classes. The conflict produced anger and social unrest. And, indirectly, new creative and original experiences, that forever changed music (namely punk rock), but also fashion, literature and filmmaking.

Thatcher’s England is now a distant memory. And yet it is no surprise that in such difficult times for the world economy and especially Europe people are talking about Margaret Thatcher again. The fact remains that Margaret Thatcher had a strong impact on British society, radically transforming it. Beyond assessments of merit, she left us a legacy that could prove helpful: courage, determination and a sense of responsibility. 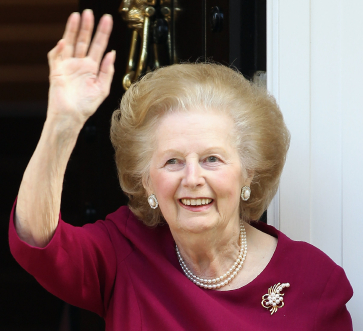