I saw them in action in a video: impressing. You can see the two brothers simultaneously approaching from two different angles the artwork they are working on, which is placed on a table with two symmetrical lents. Due to the fact that one of the brothers is left-handed, it truly seems that there’s only one person there, whose image is reflected in a mirror. It’s an incredibly meticulous and detailed work involving colours – crayons as well as clouds of pigments and powders – which took months to build.

A genuine natural predisposition placed within an articulated artistic career path: both boasting a degree in sculpting awarded by the Accademia di Belle Arti in Catania, Sicily, they mention artists of the calibre of Duchamp, De Chico, Morandi, Cezanne, Bacon, Giulio Paolini, Luciano Fabro and Buren as their source of inspiration, but also the more contemporary Gianni Caravaggio, Diego Perrone and Francesco Gennadi.

In an interesting interview published on Italian newspaper La Stampa, Carlo recalls how “In the past, we both perceived our own style in different ways, and we both lacked that meaningful significance the images needed to ‘come to life’. My brother has a more velvety structure, while my work is more polarised. I define the signs and he connects the dots […] Our mutually trusting relationship is in fact never whole, but this is also part of our equilibrium. Within this contact, each one of us is able to find his own self. More divergencies in our current of thoughts equal to an increased number of balances we will need to identify and establish between us and the matter”.

The result of the twins’ work consists of drawings and sculptures painstakingly constructed through a refined technique, pieces of art that couldn’t exist without the contribution of both parts. In fact, it appears that their work became truly complete only when the collaboration between the two siblings started. 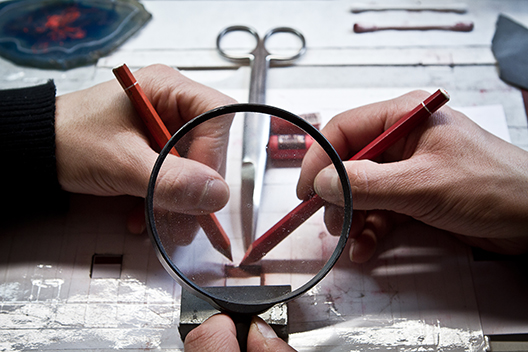