Israel: a land of contrasts, encounters and great art

A few months ago we opened a store in Tel Aviv. Recently, a friend returning from Israel showed me some pictures, and it made me think again about the great contrasts of this country that seem to summarize all its beauty and pain.

It is a troubled country, but also home to major cultural expression, as testified by its museums of modern and contemporary art. The Tel Aviv Museum is an historic museum of modern art in the city centre. Seen from outside, it resembles a smaller version of the Guggenheim Museum in Bilbao; inside; however, it’s more like the Maaxi of Rome with ramps leading from one room to another.

The Israel Museum in Jerusalem is not only a museum of art: it houses archaeological and ethnographic collections primarily (but not exclusively) related to Jewish civilization. However, contemporary art is the star here as well, as is clearly indicated by the majestic sculpture by Anish Kapoor that greets visitors at the end of the entrance stairs.

Its hourglass shape is the pivot around which the various parts of the museum are organized: the sculpture garden, the part that holds the Dead Sea Scrolls and the new structure that, starting from the archaeology collection, leads to the contemporary art collection.

The mirrored surface of this large sculpture completely “turns the world upside down”, reflecting the constantly changing light. All this – they tell me – is made even more enchanting by the sounds from the city below: Church bells alternating with the chants of the muezzins in the mosques. An extraordinary display which Kapoor, a Jewish artist of Anglo-Indian origin, has created, using the strong connection between history, various traditions and the landscape. The museum was visited by a million people last year alone. Could this be a good omen? 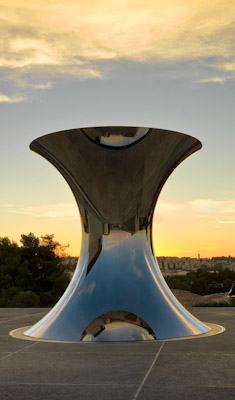