Growing up together: 21 Investimenti and Poligof

Venice, Italy: Alessandro Benetton has just acquired a controlling interest in Lodi-based firm Poligof, a pocket-size multinational company operating in the healthcare industry and specifically in the production of nappy components. The firm boasts two production facilities, one in Lodi and the other in Mira, a former Nuova Pasnac plant acquired in 2013 after it went bust. The operation, due to be finalised by the end of the summer, is part of the 21 Investimenti III program, Alessandro Benetton’s latest undertaking in the venture capital field, which aims at acquiring the controlling stakes of medium-sized enterprises in order to make them grow on an international level and support their development in emerging markets.

Founded by the Gatti family, who will still be a stakeholder, Poligof is one of the most important European operators in the production and commercialisation of health and hygiene products. Number one in Italy and market leader in Europe thanks to its technical leadership and know-how, after focusing on growth under the lead of CEO Sergio Folli, the company has managed to reach an export rate that exceeds the 70% and a turnover of approximately €100m euros, which has doubled in the past 3 years.

21 Investimenti’s development plan envisages both the strengthening of the firm’s presence in Europe thanks to the privileged relationships established with some of the industry’s main operators (including Ontex, Procter & Gamble e Kimberly-Clark) and its debut on markets that are currently experiencing a remarkable growth (such as Russia and China) through a strategy focused on investing and establishing new local production facilities in order to create an undisputed global leader in its reference market. Back in October 2013, the Lombardy-based group acquired the Mira plant, which used to be owned by Nuova Pasnac, a firm that since 2011 had been controlled by a government-appointed administrator. Poligof bought out part of the company and arranged to rent for the next 14 years the production facilities located in Mira – with the business plan submitted by CEO Sergio Folli to Italy’s Ministry of economic development foreseeing the re-employment of 165 former employees and new investments worth €6m euros.

After supporting the debut of SIFI, a leading company in the ophthalmology field, Alessandro Benetton’s investment fund is for the second time stepping into the healthcare sector and right now the company is about to close down its latest capital-raising round, strong of the €300m euros made available in the past year by both institutional and foreign investors. 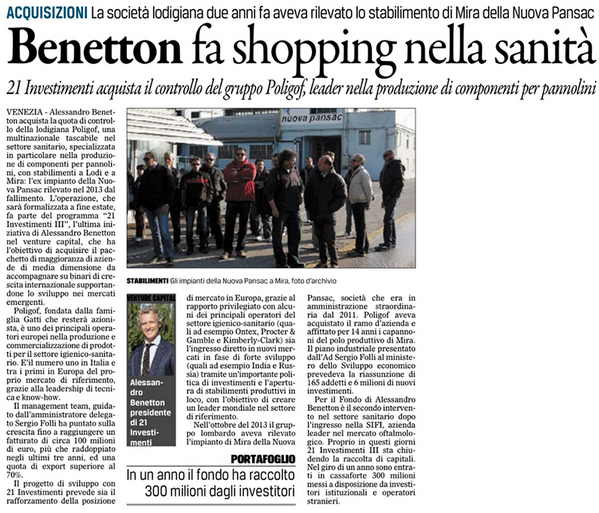