Between cooking and ping pong: Rirkrit Tiravanija in Moscow 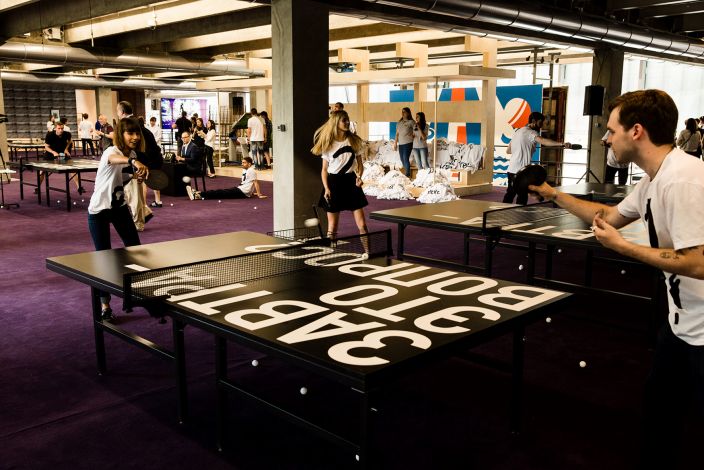 A museum has opened in Moscow at the end of June destined to become a key-location for contemporary art in Russia. Strongly supported by Dasha Zhukova – Roman Abramomovich’s wife – and signed by global star architect Rem Koolhaas, the Garage museum is located within Gorky Park, in a refurbished restaurant building from the Soviet era that had been left abandoned for years before being requalified. Now it’s coming back to life again, thanks to extraordinary artists such as Rirkrit Tiravanija. If you don’t know him yet, I’ll try to introduce him to you.

Francesco Bonami, appreciated curator and art critic with a reputation for being strict, wrote about him: “He can be defined as being nothing but the best. Of Thai heritage, Argentina-born, New York-raised Rirkrit Tiravanija has been one of the first people to turn food and food waste into art. What he does doesn’t really matter because everything he does is good and makes us happy”. He has recently done it again at Art Basel and rather than inside the fair’s pavilions, he did it outside by setting up a kitchen, which was immediately stormed by visitors, artists and curators alike. What about Moscow? At the moment there’s some food there, but not much: you always must keep in mind that Rirkrit’s mission is, as Bonami pointed out, to ‘make us happy’.

If you’re wondering what he has chosen to put on display or what kind of installation he has come up with for Moscow’s Garage, here’s your answer. The artwork is called ‘Tomorrow is the Question’ and it has been set up in an extremely spacious hall. There, Rirkrit has placed half a dozen dislocated ping-pong tables and everything you need to play. But that’s not all. In this space you will also find a t-shirt printing machine, a catering stall with people cooking and serving pel’meni, Russia’s answer to tortellini. And to make everything even better, Tiravanija has involved the Moscow Ping Pong Club and has managed to bring a major tournament to the Garage next summer. Judging by the smiles on the faces of those visiting the museum, it looks like Rirkrit has nailed it once again, he has made everyone happy.