Be careful not to snub work

A friend of mine, who is very keen on anything British, recommended me to watch Downton Abbey, the most highly rated and expensive TV series in the history of British television, which has now also reached Italy. “I can’t miss it”, he told me, half seriously and half joking. I checked it out: it is indeed an impeccable production, set in the 1920s and written by Julian Fellowes, who was awarded an Oscar for the movie Gosford Park. Nevertheless, I cannot promise I will faithfully follow my friend’s advice on Sunday evenings.

The recommendation turned out to be useful, nevertheless, when an article caught my attention while reading the online edition of The Economist. Beginning precisely with the British TV series, it outlined a very serious rift in regard to how work is viewed in Europe. What is the connection? According to the article, the snobbish attitude adopted by the British gentry toward productive work at the start of the 20th century has not actually disappeared: on the contrary, it has shifted from the aristocracy to other élites.

I quote: “the middle-class intelligentsia who populate the continent’s universities and staff its public sector have a tendency to despise the businesspeople who generate the wealth needed to fund their way of living”.

The article in The Economist is intentionally provocative, but not superficial. It mentions ancient Rome, where work was delegated to slaves, the Middle Ages, when trade and finance were carefully confined to specific social or even religious groups, the Jews. And don’t we too have the sensation, at times, of living in a world dominated by bureaucracy, in which working “normally” is nothing “normal” at all, but the eventful outcome of a series of requirements reminiscent of something from Kafka?

And so? Be careful, writes the columnist, because new forces, much less snobbish than us in regard to work, are now taking centre stage. This is particularly the case with the countries of Asia, “a region where the people are prepared to work hard and business isn’t always a dirty word”, the author incisively concludes.

Is it true? Exaggerated? It’s difficult to say. What strikes me, is that the truly critical issue of this very uncertain historic phase is precisely work. It is work that gives us our identity and has allowed us to progress and create a welfare system that today, in spite of everything, continues to protect us. It will be work and the meaning we choose to give it, whether positive or negative, that will determine how we emerge from this difficult transition. 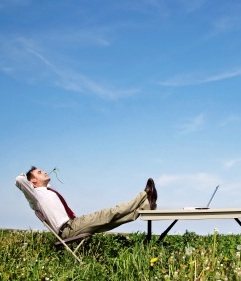