Boetti’s Maps at the Tate Modern: an Italian outlook on a changing world

Today I would like to talk about a superb retrospective dedicated to Alighiero Boetti that has just concluded at the Tate Modern in London: an exhibition I would have loved to have visited, if my agenda had allowed it.

From what I have read and heard, it was an excellent opportunity to get to know a great Italian artist who achieved success and appreciation overseas and interpreted the contemporary world with such a curious and original eye. Initially part of the Arte Povera movement, he went on to develop his own very personal and original direction, bringing him international recognition.

The most spectacular room in the exhibition was dedicated to his Game Plans, geopolitical maps designed by the artist and made in Afghanistan and Pakistan by local embroiderers. Over the years, Boetti produced these colourful political maps almost as a record of the changes taking place in the world. Another room was dedicated to his Kilims with the theme “Alternating from one to a hundred and vice versa”: Boetti was fascinated by numbers and mathematical combinations. A third room housed works on paper made entirely by students with a biro pen.

Contrasts and recurring themes run through Boetti’s work: but one of the aspects I find most intriguing, and which he has in common with other contemporary artists, is that he entrusted others, such as students or Afghan embroiderers, with the task of physically realizing his ideas.

Another work I wish I had seen in situ at the exhibition is a bronze statue from 1993 that was displayed on the balcony of the Tate overlooking the Thames: the last self-portrait of the artist. He is watering his own head with a hose, releasing steam into the air. Yet another of Boetti’s “games”, but also a metaphorical representation of an artist whose mind was truly steaming with ideas. 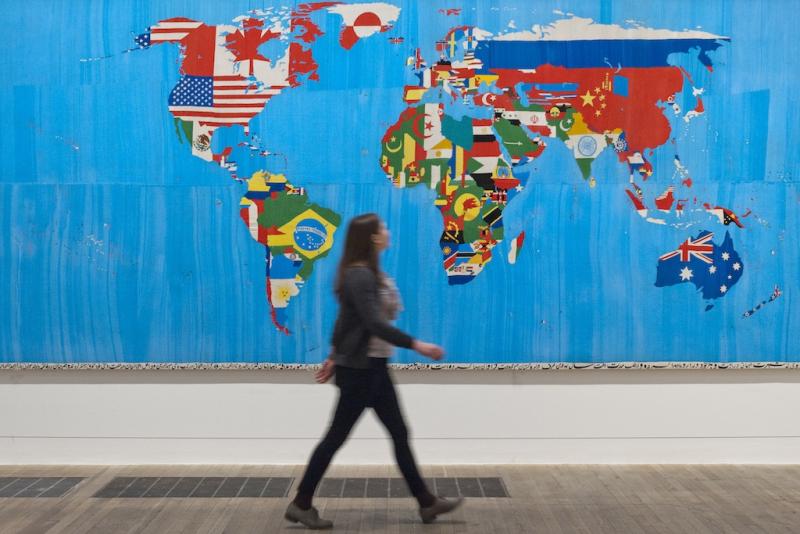