After all, it’s a legitimate question: what is art for? British-Swiss intellectual and volcanic philosopher Alain De Botton asked himself the same question, coming to this conclusion: Art is Therapy – which is also the name of a book – Art as Therapy – and of a peculiar follow-up show that will be running until September at Amsterdam’s Rijksmuseum. What is so special about this exhibition?

Simple: there’s nothing new on display at the museum. Except for some huge yellow post-it notes that have been stuck next to the artwork on show, and for some everyday objects that have been casually scattered around the building: in the shop, at the bar and even in the toilets. The post-it notes – written by both Alain de Botton and John Armstrong – are captions to the surreal, spontaneous, sometimes funny, often disarming artwork, words that offer the public a different spin on the pieces on display in order to push them to look at art and at the world’s big museums – such as the Dutch one – with different eyes.

An example: Alain stuck a note next to a 14th century Buddhist statue that simply said: ”I want my mum. Even though I’m forty-four and a half years old.” And also: “I hate crowded places. I want to be by myself” next to Rembrandt’s oil painting The Night Watch, which is always surrounded by large amounts of visitors. Funny, isn’t it?

If you feel attracted by this unique concept, you’re not the only one: in the UK, De Botton is hugely appreciated, but also equally criticised. If the Financial Times recently dedicated a long and positive review to him, the Guardian has irrevocably torn him into pieces for his ‘Art is Therapy’ project. Let’s keep an eye on him. Alain de Botton with this operation has brought a new spirit to the usually formal world of big European museum institutions. But he did it with courtesy, achieving his goal of bringing the wider public closer to art by using a simple, straight-forward and yet unpredictable language. 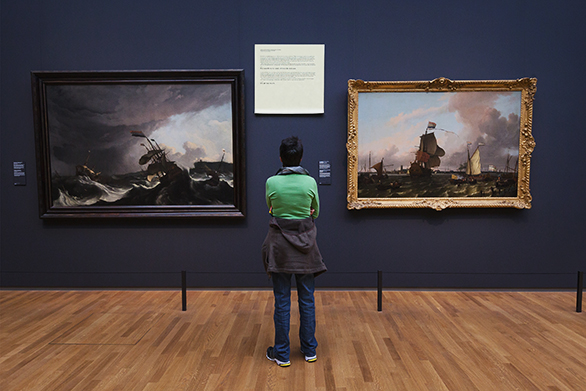