Everything is ready for next month’s APT8 in Brisbane, Australia: an event that will gather the best of contemporary art of both South East Asia and those remote Pacific regions that despite being so far, have proved to be vigorous and creative forces from an artistic point of view. Among the eighty artists that have been invited to take part, I’d like to set the spotlight on Anida Yoeu Ali and her ‘Buddhist Bug’ project. Today a forty years old artist, Anida was born in Cambodia in a dramatic historical time, when the Khmer dictatorship was ravaging the country.

Born in a family belonging to a Muslim minority, back then relentlessly persecuted by the dictatorship, Anida was raised in Chicago. She decided to go back to her native country only on 2011 and once in Phnom Penh, she found fresh inspiration that led to her creating surreal scenarios, such as the one featured in the video about the Buddhist Bug’s latest adventures that will be shown at the APT8. A performer with a penchant for investigating the concept of identity, for a while Anida has been travelling South East Asia wearing a special orange outfit whose colour reminds of a monk’s tunic and that makes her look like a giant orange caterpillar.

Wearing this costume, she takes quirky shots – together with her partner in crime photographer Masahiro Sugano – in locations that seem frozen in time, amidst the smiles of the people surrounding her. Anida explains that her work wants to pay homage to diasporas, refugees and all those forced to wander on a middle-earth where identity has drowned in a sea of thousand others. If the colour of her costume tells about her relationship with Buddhism, her face is partly covered by a hijab, the traditional islamic veil. The message? Coexistence can be achieved. 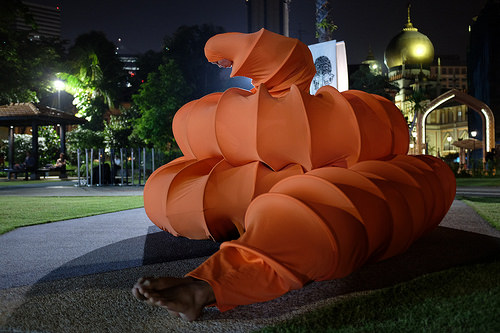