PORTRAIT – With his privaty equity firm, 21 Partners, the son of Luciano Benetton, an adept of lateral thinking, found his own way, dedicating himself to investing in SMEs in France, in Italy, in Switzerland and in Poland.

“Hi, Alessandro!”, he introduces himself by his first name, in the Anglo-Saxon way. Firm handshake and big seductive smile. Smart look of a New York golden boy and a vague family resemblance with his father, Luciano, who created and managed Benetton with his brother. A world famous brand that marked the collective memory with its colorful sweaters and universal and anti-racist messages. Time has passed, competition has increased. Benetton has diversified and is now run by “a friend of the family”. And Alessandro, after having secured a time of transition at the head of the company, between 2012 and 2014, continued to blaze his own trail. Alongside, to show that he is anything but “the son of”, in a country where Benetton are almost like royalty and where the tabloids scrutinize their every move. A family, who, despite a casual appearance, works to maintain its place and give a certain image of success. Almost austere, with the class and the restraint that are appropriate in some circles of northern Italy.

Not easy to be the end-chain of such a dynasty. It either crushes or motivates. Alessandro decided that it would drive him. Handsome, rich, athletic, always at ease, close to Henry Kissinger, the director of la Stampa, his friend, or John Elkann (the grand-son of Giovanni Agnelli), godfather of his son, could have “played it easy”, becoming a literal heir, putting himself on track to follow the steps of his father. He preferred to take a different path. First he flew off to the United States to study in the best schools in Boston and then at Harvard. Then working in the City, at Morgan Stanley. Far from the Italian countryside, the textile industry and the majestic stronghold of the family in Treviso. Time away to prove himself. To assert himself. “All by myself” like Eric Carmen sang. The traditional breakaway of a “son of”. Also maybe to get some air, but that he wouldn’t say.

He does not say much about himself, in fact. The self-protection reflex of an heir, cautious to the extreme, measured, who is used to fleeing the spotlight but knows how to catch the light when necessary. He who at 8 years old was in yellow shetland for the family business and explains how at 12, he was cleaning machines and floor of the company, and then always coming back to “his” company, 21 Partners, this private equity fund, specialized in investing in SMEs in Italy, France, Switzerland and, recently, in Poland. He created it in 1992. He was then 26 and had doubts about the viability of his business. But as a follower of the theory of lateral thinking, according to which, through imagination, you can end up where you do not expect, Alessandro succeeded. Protected, he admits, by the family safety net, which in additional to financial support gave him love, an ability to navigate all terrains and more than anything values.

Values ​​which he insists on, like a Quaker from the South, referring over the course of the conversation to a certain ethic, a sense of social responsibility and duties which one cannot escape when your name is Benetton. Engaged in humanitarianism, particularly in Africa – he gets fired up thinking about the waves of immigrants arriving on Italian shores. And rather than dwell on his life and his hobbies, he, who like so many of his peers is a collector of contemporary art, cites the companies in which he invested: like the Sicilian SMEs in the pharmaceutical sector or another French vending machines company whose sales increased from 50 to 200 million euros in four years. SMEs, often family owned, in sectors not always very glamorous, but which, according to him, “are the real backbone of the economy” and have true potential for development. To such a point that the group will invest nearly 800 million euros in the next six years.

Amateur of philosophy and ardent defender of Latin and Greek, Alessandro Benetton also directed from 1988 to 1998, the automotive Benetton Formula. Formula 1, beautiful cars, beautiful girls… Could it be the snag in the frock of this so perfect manager? He says no. If the old “bello ragazzo” that teenage girls ran amok, sneaking out straddling his Vespa, hair flying, has fulfilled this mission he said it was for the business. The opportunity to win two World Champion titles, but also to confirm that, for Benettons, sport to combines the transcendence of values ​​and teamwork. It is also not by chance that this great lover of skiing and kitesurfing married Deborah Compagnoni, a former ski champion with whom he had three children. Children to whom he reiterated that while being particularly respectful of others are privileged and they must chart their own path. Future ‘lateral’ heirs. 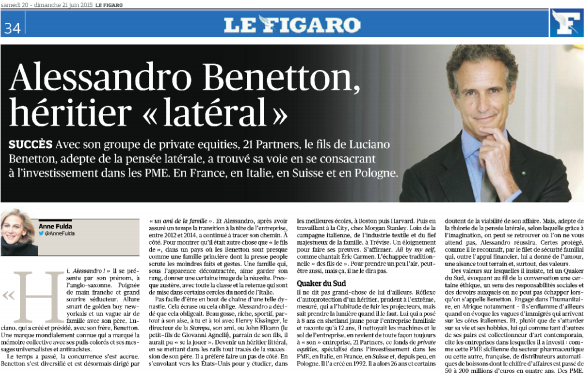