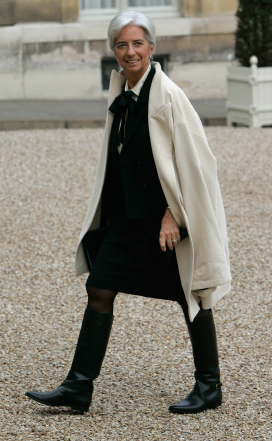 “Lagarde’s presence certainly transforms the image of the fund. But there are deeper changes afoot at the IMF that set it apart from the institution of even a year ago.”

This sentence is taken from an interesting Newsweek profile of Christine Lagarde, the current managing director of the International Monetary Fund.
What makes me want to mention it here? It is not just the portrait of a woman in a prominent and powerful position: a rare thing, certainly, but it does happen and it would be good if it happened more often. What strikes me is the “how”: Christine Lagarde is interpreting the role with her personality and sensitivity.

In the colourful words of Newsweek journalist Christopher Dickey, “the IMF used to be known as ‘the institution that ate babies for breakfast’”. Christine Lagarde is now trying to disprove this perception by improving relations with countries throughout the world. Trust in the organisation is now increasing: EU countries are gradually accepting that they can count on an ally who can prescribe “a course of treatment” to get out of the crisis.

It seems to be the victory of relational intelligence, a trait more common among women. Perhaps there is no scientific proof of what I am about to say, but I like to think there is a “woman’s approach” to leadership, one that is based more on communication and collaboration. For the moment, one thing is for sure: difference (in gender, but not only) is always an added value.