“That is how we revitalise companies with 21 Investimenti”

Alessandro Benetton is at a turning point, for the umpteenth time: his creation, “21 Investimenti”, turns 25. The adventure, started when private equity funds in Italy were still unknown, has now grown up. “Yes, it is an adult now. It keeps changing because the one that does not change is lost.”

How much equity do you manage?
“A billion and a half. At the beginning of 2000s we have changed, we became a pure Private (Equity) structure, and we went from SMI’s financiers to stakeholders of those companies that are bearing the choices and taking the management’s responsibility. This has satisfied us a lot.”

Have Italian companies changed because they chose to do so or because they were forced to?
“Someone who lives a company’s management on a daily basis can incur in the risk of lacking both the time and the expertise needed to rise his/her gaze and look at the future, as well as at the required changes to face it. In today’s environment, one can even be perfect, but industrial cycles do not last 30 years. Everything is faster.”

Is it different in foreign countries?
“Italian companies are aligned by now. ‘21 Investimenti’ already has 5 funds in France. The last one is being launched now and it will be a 250 million euros fund, as well as the last “national” one, since the next fund will be “pan-European”, with no boundaries.”

How much does your investments cycle last?
“Twelve years. The best one was the Italian cycle that started in 2007 because there was an awareness acceleration of those people in need of a different guideline on speed. We have completed over 90 investments and collected resources for over 1.6 billion euros from Italian and international investors. Our companies generate 1.4 billion revenues and employ 8,000 people. In 25 years of activity, total yield is more than 20% per year. From 2007 until today, we have had an extraordinary value creation.”

Can you give us an example?
“Nadella Italia, a company founded in the 1930s in which we invested in: it produces bearings and cam followers you see at the airports. It used to have 30 million euros turnover and 100 employees. Nowadays, 65% of its turnover comes from foreign countries; 5% of its staff is employed in the R&D field and it develops about 100 new products every year. The result: earnings, profitability and employees have doubled.”

You talked about speed: how often does a company need to change?
“It varies according to contexts. Change does not follow a straight line, is has steps.”

Are Italian companies ready?
“The financial crisis has accelerated the awareness. They are forced to have shorter reaction times.”

About the speed of changes. Are Amazon’s bracelets a step forward?
“At Bosch, I have seen glasses that carry you through the warehouse. We have to leave dogmatism behind in this field too: the human kind seeks evolution. You have to make some steps forward: if you notice that something is not working, you are always in time to come back. You cannot escape the future.”

What is your opinion on the flat tax?
“Flat tax’s implementation has to be done gradually because it generates some financial statement’s deficit. Planning and progression are needed.”

How do you evaluate generational changes in Italian businesses?
“I have seen fathers who have not found suitable successions’ option, and just as many that have not been able to understand their children’s characteristics; perhaps because they tried to make them wear a ‘tailor-made suit’. Maybe, in the meantime, the ‘fashion’ has changed and the son or daughter has different shoulders, or maybe the son/daughter knows the current style better than his/hers father.”

What about your adventure in Benetton Group? You had already collected many successes with “21” and you are a generational change expert: you left the company after a few months. It almost seemed like an escape. It has been five years since you left: what has happened?
“I must go back many years: when I came back from Harvard I was 27 and I should have been in charge of the sportswear diversification. However, with Professor Porter I understood that that field would have changed and that the change itself was even more important than management.  Unfortunately, I was just a prophet: in the end, the great distribution came and put the sector in trouble.”

So?
“So when they told me they still wanted to use the old model I preferred creating my own path.”

But then you came back at Benetton after twenty years, first as a vice-president and then as Chairman.
“As vice president, I used to work alongside my father and the CEO who had been working with the family for thirty years. In those years, I shared the proxies with them and I experimented with the ideas I had in mind for the company’s future. They asked me to become president in April 2012 but, already in November I wrote to the Holding’s CEO to tell him that I was no longer interested.”

Why?
“Because if one has to drive, he/she just does it: there must not be too many hands on the steering wheel. Therefore, in 2013 I left the management that was taken over by Edizione. It is not a matter of presumption or of bad relations. Indeed, I have always had extraordinary understanding for affection and respect for everyone, even with the managers or the CEO. However, when I realised that everyone’s passion was creating a lack of focus on the future, I preferred to step aside. Without problems. My work was and is here at ‘21 Investimenti’.”

How do you evaluate the comeback of your father Luciano at the Benetton Group presidency?
“As I have already said, I have been out of the company for 5 years; I do not know the current situation in depth. However, I see it as an interesting discontinuity moment. A good challenge: if you are well organised, a good result could come out of it. It can be a trigger for a new energy: I will certainly cheer for him, it would be important for everyone and for my father in particular. Even though I have reached an age when I feel more like a father than a child.” 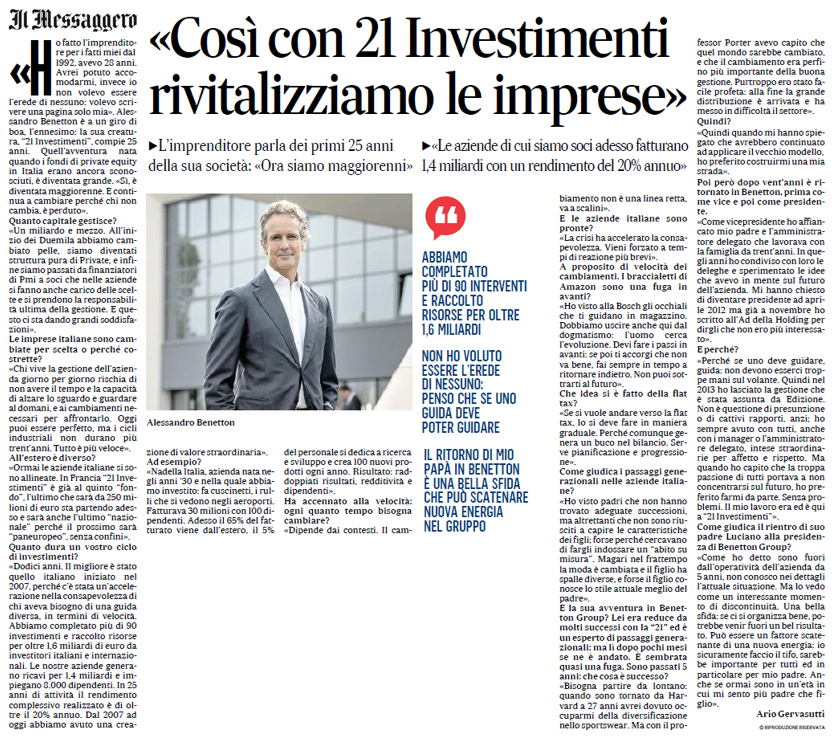